Skip to content
Here’s an etiquette survival guide for the groom’s mom.
by Amy Elliott 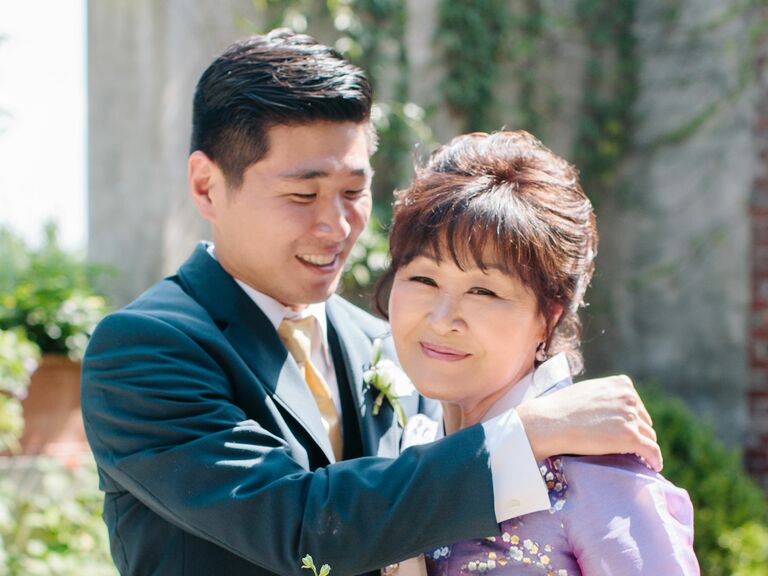 If you’re still hazy on separate bridal showers, the mother-son dance, the rehearsal dinner and other miscellaneous mother-of-the groom mysteries, don’t fret—you’re in the right place. Here’s an etiquette roundup with the solutions you need to pull off your role perfectly.

Can the groom’s parents host the engagement party?

Who makes the first move?

Traditionally, the groom’s parents call on the bride’s parents after their son announces the engagement. That means they either drop them a nice note or make a phone call to make plans to get together. Getting together can mean dinner or drinks at their home or out, a weekend trip to the town where they live—whatever. But it’s also totally okay for the bride’s parents to make the first move, or for the couple to get everyone together to get acquainted if they’re not already.

Per general etiquette, the mother of the bride buys her wedding day outfit first, then notifies the mother of the groom about the color, length and overall formality of her choice. But if the groom’s mom doesn’t get word by the four-month mark, she should touch base with the bride-to-be about what to do.

What are the traditional mother of the groom responsibilities?

Typically, the bride is in charge of assigning tasks, and the degree of mom involvement should be left to her discretion. The mother of the groom can take over any of the wedding planning responsibilities once you get the go-ahead from the bride. And for a full rundown, see this detailed list of traditional mother of the groom duties.

Does the father of the groom have a specific to-do list?

The father of the groom can get in on many tasks—definitely include him in any of the things you plan on tackling yourself, or split your to-do list down the middle.

If the groom’s family and friends live far away from the bride’s, can the mother of the groom host a separate shower including only the groom’s loved ones?

It’s most traditional to have just one shower, hosted by the bride’s attendants (or her family), with the mother of the groom and other groom family members included on the guest list. Even so, many brides have a several showers—one at work, one with friends, one back home at her mom’s, to name a few examples. So it’s okay (and pretty common) for a bride to be feted by the groom’s family in addition to the original bridal shower. The groom’s mom should just make sure to touch base with the bride’s maid of honor (or whoever is hosting the other shower) to let her know that her decision to throw a separate shower is because of the distance. Also, to avoid stepping on any toes, the shower should be hosted after the fact, not before. Remember, the point of a shower is for all of the women close to the bride to come together for a few hours of gift giving, good food and bonding. If the two camps aren’t able to mingle, everyone should try to keep the bride’s interests at heart and go from there.

Is the mother of the groom invited to the bachelorette party?

When it comes to bachelor and bachelorette parties, a no-parents rule is usually a good call. In some circles, however, you’ll find the bride’s and groom’s dads whooping it up at the bachelor party. So it’s perfectly logical to assume the mother of the groom could be invited to the bachelorette bash. But think about it: If you were the bride, would you want your future mother-in-law to be along for the ride? Don’t take not being invited personally—consider it good judgment. Maybe invite the bride out for your own night on the town for some old-school female bonding.

Does the groom’s family only pay for the rehearsal dinner or should they plan it too? Who makes up the guest list?

Confer with the bride and groom to devise a game plan that you and the father of the groom, as hosts, will eventually carry out. For example, they’ll provide you with a guest list (usually the wedding party, parents, grandparents and close out-of-town relatives), and you’ll be the one to send out invitations. Get a sense of what they’re looking for (musical entertainment, a pizza party, a backyard picnic, a four-course meal at the club) and then offer to make the necessary arrangements and reservations. Of course, negotiating who’s invited and where to eat may be necessary if money is an issue. Try your best to compromise, while keeping the wishes of the bride and groom at heart.

Does the mother of the groom have to stand in the receiving line?

Having a receiving line is optional, but they’re a staple at traditional weddings. So you can probably expect to join the ranks after the ceremony; traditionally, the groom’s parents and bride’s parents will flank the newly married couple in line. If you’re concerned about small talk, keep in the mind that the receiving line is quick and painless. Guests will simply shake your hand and offer warm but succinct congratulations to you and your husband. So there’s no time for chit chat with anyone you don’t know (or don’t particularly like!).

Also, keep in mind that some couples have their wedding party (parents included) formally announced upon arrival at the reception. This reception ritual can function in lieu of or in addition to a receiving line. Here, you and your escort have only to walk into the reception when your name is called, while guests applaud. This is also quick and painless. Your son and future daughter-in-law just want to spotlight you and give you proper recognition.

What can I expect from the mother/son dance?

The mother-son dance is an especially touching tradition and a wonderful way for the groom to honor his mom. Both the mother-son and father-daughter dances usually take place towards the end of the reception, before cake cutting time. Some grooms and their moms decide on a song together; some grooms leave the tune entirely up to mom. What will happen: The DJ, bandleader or banquet manager will announce that it’s time for the father-daughter and mother-son dances. Often the groom and his mom are up first.