Skip to content
Do guests feel like they are only second fiddle if they find out that they’re solely invited to the reception? 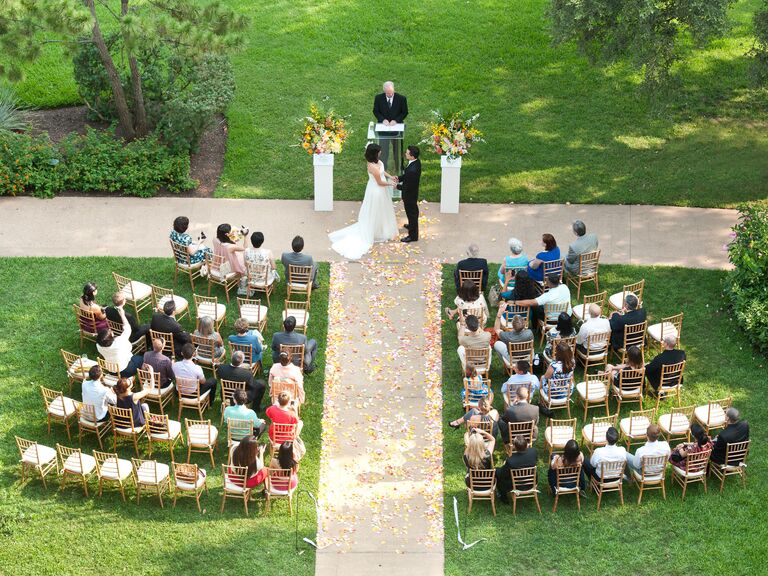 We’ve seen a rising trend during our Wedding Wednesday chats on Facebook asking if it’s okay to have a small, intimate wedding ceremony followed by a bigger reception party on the same day. And, if smaller ceremony guest lists are okay, how should the invitations be worded differently for the smaller group invited to the ceremony versus the people only invited to the party portion of the evening?

This isn’t an unheard of phenomenon, and it actually goes back to having a fun party post elopement or after a smaller destination wedding. But even though traditional etiquette rules don’t expressly forbid doing this, it still has a tendency to rub some guests the wrong way, no matter how nicely the invites are worded.

One bride on our community boards asked the question pretty clearly: “We decided early on that we wanted a small wedding ceremony that only includes our immediate family. We plan on having an evening dinner celebration on the same day as our ceremony with everyone (85 people). I’ve been reading too many posts about how rude it is, and others that say its perfectly fine! Help!”

The response to this bride’s thread wasn’t entirely supportive. Many people fired back at her, saying that they’d never attend a wedding reception only and that it feels like a “gift grab.” While others said that they didn’t know what all the fuss was about, since the reception is the main event.

Can you have a small ceremony? Yep, just remember…

Regardless of where you fit on that spectrum, one thing remains clear: If you’re having a smaller ceremony it should truly be intimate, with just wedding party and family members attending. If you invite one half of the guests to the ceremony and another half gets completely left out, it really does seem like everyone else is second fiddle. And even though it’s understood generally that the wedding reception is the more costly portion of the evening, it’s hard not to feel like you aren’t as important as the guests who were invited to all the events.

Reasons to have a smaller wedding ceremony:

1. The capacity of the ceremony venue only allows part of your guest list, not all.

2. Your whole wedding is an intimate affair.

3. It’s part of your elopement plans or small destination wedding plans, and you’ll celebrate with a wider group of people when you return.

A few alternatives to consider:

If you are keeping things small because you only want the people around who matter most, you might consider cutting the entire guest list down and marrying at a destination that gives you a built-in excuse for only inviting a certain amount of people to the entire celebration. That way, you’re covered and the problem is solved.

If your ceremony location has a capacity issue, that’s definitely more understandable, but it still doesn’t take away that feeling of being a second-choice guest. Before settling on a ceremony venue, you should do some extra research to find out if other ceremony locations in your area would take on more guests. If you’re set on your location, that’s totally okay! Don’t sweat it. This is one thing people understand even if they feel like they wish they were included.

Our easiest advice? Invite everyone you’d like to have around you (within reason) to both parts of your wedding — that way there are no hurt feelings. And again, if you’re set on having a smaller ceremony, stick with a family-only policy. Adding in equations about which people get to come to the ceremony, and which people don’t, based on how often you interact with them or how long they’ve been friends just gets murky. Drawing the line at family members is a clear action that’s easy to follow and hard to argue.

If you are having a smaller ceremony, here’s what to do:

One group to the people invited to all events, and one to the group that is just invited to the reception. Word the reception-only invites like this: “[Names of the couple] request the honor of your presence at a celebration of their marriage Saturday, the ninth of January at seven o’clock at the Rob Roy Country Club in Mount Prospect, Illinois.” This way, guests will understand that the wedding itself will have already taken place.

Field questions about when the ceremony is taking place.

Be prepared to be asked about when the ceremony is happening. Let guests know that you’re just having an intimate ceremony with limited space, but you hope they can still celebrate with you! Hopefully this will drop the hint and you won’t be asked many more questions.